I read this comment in a thread about the difference between electronic vapour cigarettes and tobacco based cigarettes on Facebook. I also want to point out that this person’s grammar sucks. That’s not my fault, and not important for this topic, but it is a pet peeve of mine. Typos are one thing, but this is just lazy, shitty typing. Anyway, back to the comment:

“i wish people would leave smokers alone….. at least we are not impaired – like some of our politicians and policemen……. i can smoke 10 cigarettes in a row, get behind the wheel of the car and not do any harm except to myself, 10 beers however, or 10 joints…… our focus should be off smokers and on to drinkers”

I’m not going to identify the poster, but I’d like to take a second to say how awful and backwards this comment is, as a drinker and non-smoker.

About the politicians/policemen part, that’s not fair. People of all walks of life and in all types of professions have substance issues. To point out that politicians and policemen are “impaired” is not relevant to the topic and shows that you think it’s only an issue if you’re a public figure, or that you actually believe they’re the only ones doing it.

Alcohol can be good for you. Having a couple drinks doesn’t shorten my life span. In FACT, in many cases, having a glass and a half of wine per day can help improve blood flow and have many positive health benefits. It’s recommended by many doctors for many different situations.

Alcohol is a person’s choice. You can choose to drink or not. If you’re having a beer or a glass of wine at your own table, it’s up to you, and you’re the only one affected by that drink. 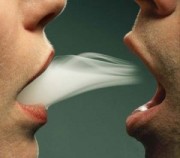 Smoking is a choice that doesn’t only affect the smoker. Second hand smoke is a leading cause of cancer in non-smokers. You and your “choice” have a direct and immediate effect on all the people in the vicinity. The same negative, life-shortening effect I mentioned above. So unless you’re smoking in an isolation bubble, “not do any harm except to myself” is a false statement.

I could go on and on comparing, item by item, the differences that make this comment silly, but I’m tired and I think I’ve made my point. Yes, drinking can lead to impaired drivers and accidents, but that is again a choice made by an individual that (like smoking) I would say is a poor one which doesn’t affect only the individual making the choice. I’d compare impaired driving to smoking before I’d compare smoking to drinking in general.

PS – I purposely ignored the comment about 10 joints… I’m not much of a weed smoker either, but I’m pretty sure you don’t sit down and smoke 10 joints in one go. Right? Seriously, people don’t usually do that, right?